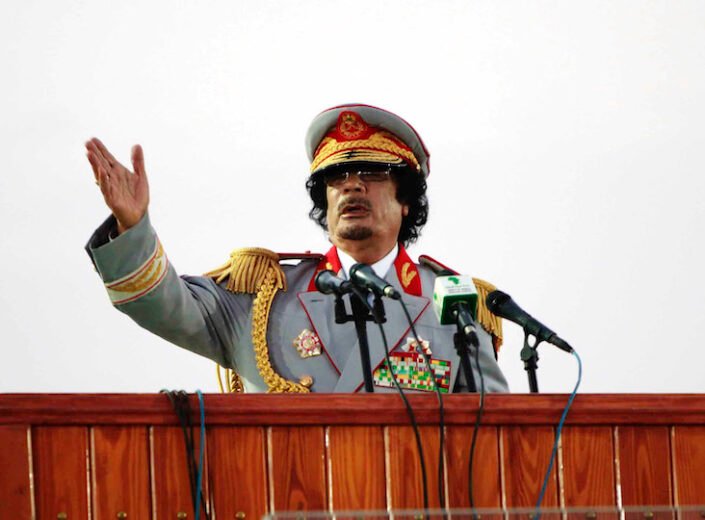 Please note this story is based on events that allegedly took place. Libya was the world’s poorest country in 1951. Gaddafi made it Africa’s most developed country with $150 billion foreign reserves & zero debt. Under Muammar Gaddafi, Libya had one of the world’s strongest currencies. 1 Libyan Dinar equalled $0.82781 (USD) in 2011. Gaddafi wanted to give all African countries the Dinar to strengthen their economies. He also had more than 140 Tonnes of Gold and similar amounts in silver which he wanted to distribute accross Africa to be used for trading.

A series of leaked Hill4ry Clint0n Emails Revealed NAT0 Killed Gaddafi to Stop the formation of a United States of Africa. Of the 3,000 emails released (2015) from Hill4ry Clint0n’s private email server about a third were from her close confidante Sidn3y Blum3nthal. One of these emails dated April 2, 2011 said, “Qaddafi’s government holds 143 tons of gold, and a similar amount in silver … This gold was accumulated prior to the current rebellion and was intended to be used to establish a pan-African currency based on the Libyan golden Dinar. This plan was designed to provide the Francophone African Countries with an alternative to the French franc (CFA).”. In a ‘source comment’ the original declassified email said, “According to knowledgeable individuals this quantity of gold and silver is valued at more than $7 billion.”.

French intelligence officers discovered this plan shortly after the current rebellion began, and this was one of the factors that influenced President Nicolas Sarkozy’s decision to assign France to the attack on Libya. According to these individuals Sarkozy’s plans are driven by the following issues:

Conspicuously absent is any mention of humanitarian concerns. It’s clear the objectives were to get rid of the unification of Africa, money, power and oil. At one point in life Gaddafi and Obama were best Friends. But since Obama was now on the West making the matters worse as the president of USA, the west broke their friendship. A quote from Gaddafi about Obama (his Friend) wanting him Dead is shown below.

The main stream media will never give you the information on this post. The media is the most powerful entity on earth. They have the power to make the innocent guilty and to make the guilty innocent, and that is power. Because they control the minds of the masses. With the information given one can only believe it’s true the US g0vernment spread propaganda in the media to get Americans to support any form of terror.

After Gaddafi was killed a huge slave trade began and grew out of control. Obama made comments about the consequences of killing Gaddafi in the past which will be explained in our “Libya Slave Trade” post.

Feel free to make a donation to Africa Archives using this link.

One thought on “What Really Happened: The Muammar Gaddafi Story”