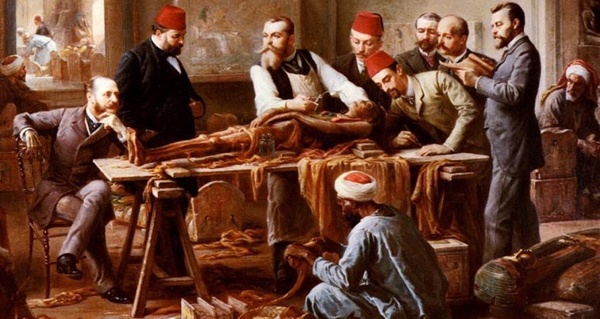 For several hundred years (1,000+) europeans ate mummies and may still eat them today. This sick behavior goes back to the 12th century became extremely popular around the 16th & 17th century. At the time people believed consuming the corpse (blood, bones, fat) of egyptians would solve their health problems, give them knowledge and strength. Some even thought they would obtain power and kept mummy body parts as good luck charms. King Charles II is known for drinking a potion of alcohol mixed with crushed human skull. This mummy powder (Mumia/Mumiya) medicine and drinking blood is listed in German medical logs. Laws would eventually be put into place during the mid 1800’s to protect egyptian bodies and belongings. But the laws didn’t stop people from holding large gatherings for aristocrats where mummies were slowly unwrapped in a celebratory fashion between the 17-1900’s. Mummies were ground into powder and then sold. In result there was a large number of grave robberies and mummies were also trafficked in the mummy trade. The need for mummies was so great some people used the opportunity to grind the bodies of old/sick people and act as if they were mummies. After a while people believed the corpse of anyone would suffice. German/Swiss doctor Theophrastus von Hohenheim aka Paracelsus encouraged people to pay for a small cup of blood at public executions. Bodies were dissected after executions for future use and poor people would also show up to the public executions so they can beg for blood to drink. In regards to eating dead people Leonardo da Vinci once said, “We preserve our life with the death of others. In a dead thing insensate life remains which, when it is reunited with the stomachs of the living, regains sensitive and intellectual life.”.