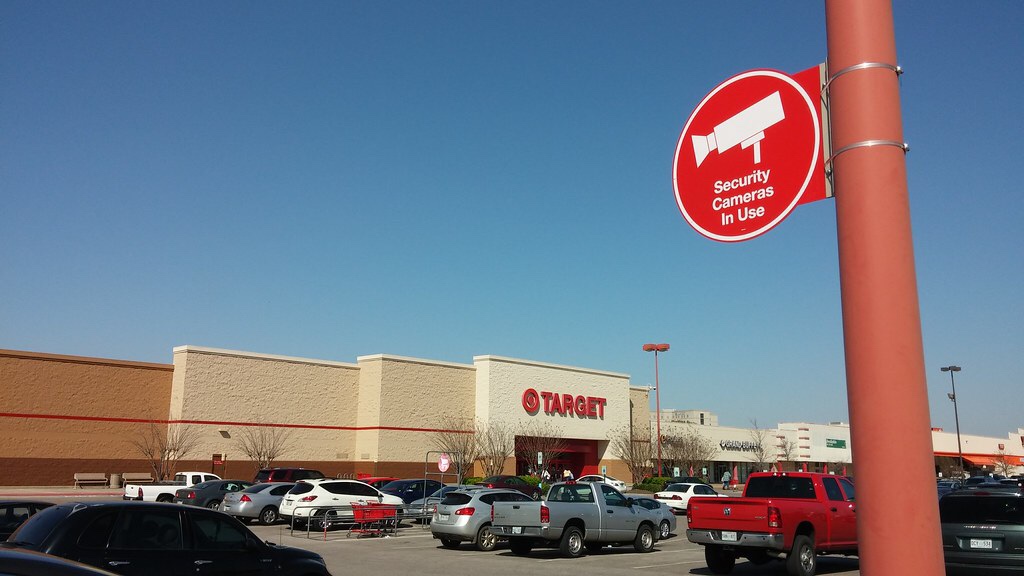 The purpose of this post is to highlight the collaboration between Target and law enforcement. Dating back to the 1990’s Target developed a unique relationship with law enforcement to crackdown on shoplifting and prevent crime in general. With money and their influence Target convinced city leaders and police departments to give them control of urban centers. Eventually Target became one of the most influential corporate donors to law enforcement. They also supplied huge amounts of money for advanced surveillance technology and even started forensics labs of their own. A program created by Target called “Safe City” was launched during the early 2000’s. Safe City Program PDF can be read here. In 2003 Target donated $300,000 to the Minneapolis police and together they created a program called “Minneapolis SafeZone Collaborative”. The program installed 30 cameras covering around 18 blocks Downtown Minneapolis and had a private radio system that connected police with businesses, security guards + other service workers. Within the 18 block perimeter advanced surveillance systems were everywhere and monitored 24/7. In 2008 Target expanded the SafeZone program to 25 cities nationwide. When Target opened their West Baltimore location during 2008 they donated $300,000 to the Baltimore police for command posts, advanced cellphone tracking and computers. They also became a corporate sponsor of the Los Angeles Police Department’s Regional Crime Center then donated $200,000 to the Los Angeles police for data-mining software and services from a surveillance/intelligence company called Palantir Technologies Inc. In 2009 the Minneapolis police reported around 9,000 arrests within the SafeZone, this was a 60% increase since the program was created in 2004. The people arrested within the Minneapolis SafeZone could be banned (geographic restriction orders) from the zone with court approval. According to city data around 214 people was banned from the zone between 2009-2021, more than 80% of the arrests were for misdemeanors and 70% of the offenders were Black. Those are mind boggling figures due to Black people being only 20% of Minneapolis’s population. A government evaluation of Target’s Safe City Program can be read here.

In Albuquerque, New Mexico Target gave law enforcement $100,000 to develop an intelligence database that’s accessible to businesses, security guards + other service workers similar to the system in Minneapolis. The network hosted images + reports of susoicious individuals and a ton of data is collected including names and license-plate numbers. People that are accused of shoplifting or other misbehavior at Target locations in Albuquerque, NM could be tracked with Target’s system and turned away from Walmart, Kolh’s + other retailers.

Target stopped funding their SafeCity programs when the Black Lives Matter movement began shaking things up in inner cities during 2015. A few days after the George Floyd riots Target tried to hide it’s partnership with law enforcement by deleting all SafeCity information from their “Community & Safety” webpage. They also deleted any information related to their trademarked name “Target & Blue”. This name was given to the overall collaboration between Target & law enforcement. Although mostly Black people were affected by Target’s SafeCity programs vice president of compliance, ethics and security Tony Heredia said the programs had nothing to do with race. He also stated the program was never intended to expand to 25 cities and the company is focusing on their philanthropic efforts. Shortly after this Target also denied having any involvement with the geographic restriction orders that banned Black people from Downtown Minneapolis then said SafeCity + Target & Blue information was removed from their “Community & Safety” webpage because it was inaccurate and outdated.

From 1984-2001 a gentleman named King Rogers was Target’s security executive and under his supervision Target became one of the very few retailers with intense security surveillance + methods. While expanding into markets with high crime rates Rogers knew law enforcement would be busy dealing with serious crimes. This led to Target building cases against shoplifters internally to help law enforcement pursue defendants. Target provided all of the evidence collected to law enforcement. This includes video recordings of shoplifters in the act and recorded interviews conducted by Target employees. When Rogers retired in 2001 a former FBI agent named Brad Brekke took over with a goal of protecting assets. Under Brekke’s supervision Target improved their network of forensics labs and was able to develop an effecient sytem that could enhance video evidence, repair damaged audio recordings + process fingerprints. Their system was so great law enforcement would often use them to help investigate violent crimes. The National Law Enforcement Museum in Washington acknowledged Target’s immaculate security system and featured them in an interactive exhibit called “Target Take the Case”. Over the years Target never stopped enhancing their video surveillance. A team of experts developed a patented algorithm that can detect wheter or not an individual is showing behavioral characteristics of a shoplifter. They also tested face recognition but allegedly this technology isn’t used today in stores.

If Target’s Safe City Program isn’t dissected by the general population within the near future they could become a huge threat to humanity with their technology + collaboration with law enforcement.